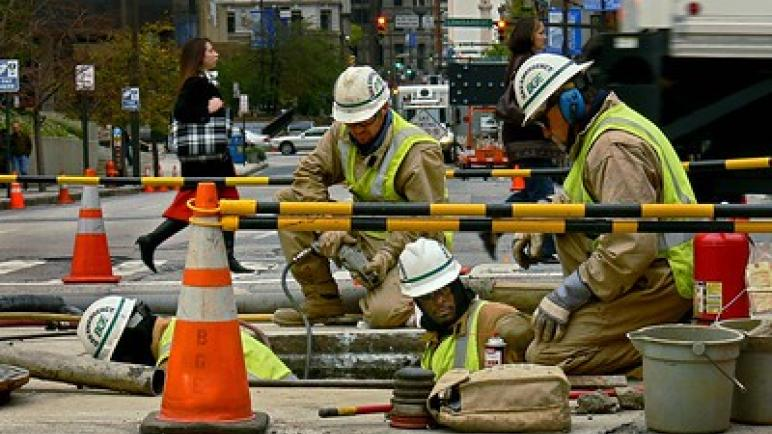 The leak prompted a small evacuation but a wide warning alert after a contractor cut a gas main in a residential area, authorities said.

Downey’s fire and police departments arrived at Stewart and Gray Road and Rives Avenue at 10:32 a.m., said Tracy Gonzales, the Fire Department’s supervisor of communications. Southern California Gas responded shortly after and have worked with first responders to stop the flow of gas from the severed 6-inch main line.

At 3 p.m., SoCalGas estimated it would take four hours to cap the leak, said Juddy Montenegro, Downey’s public information officer. At about 8:30 p.m., the fire officials said repairs would take another eight hours.

Police have secured the area and road closures are in place on Stewart and Gray Road from Paramount Boulevard to Rives Avenue.

A 300-foot evacuation zone was set up around the leak. Montenegro said about 40 households were affected by the evacuation orders.

No injuries have been reported, but the department is providing shelter for those evacuated to shield them from the light rain, Gonzales said. Residents in the area may smell a natural gas odor while crews work, SoCalGas said in a statement.

As of 1 p.m., Los Angeles County’s large vaccination site in Downey was still open and unaffected by the leak.

An emergency alert was issued about 12:35 p.m., notifying L.A. County residents to avoid the area. Montenegro said the city was “testing a new system” but the alert was only intended for residents near the area.

“Unfortunately, it went out to more people,” she said.

Michael Jerrett, a professor of environmental health sciences at UCLA’s Fielding School of Public Health, said that the short duration of the evacuation order and the size of the evacuation zone signaled that there wouldn’t be a high concentration of air toxins that could endanger returning residents. But he did advise that residents open windows to increase the air flow in their homes.

“I wouldn’t be concerned about going back to my own house if it was the same circumstances,” he said.

Read the full article at: https://www.latimes.com/california/story/2021-04-22/natural-gas-leak-pro…