Unnatural Disasters and Environmental Health
Causes, Consequences and Prevention in the Case of Porter Ranch 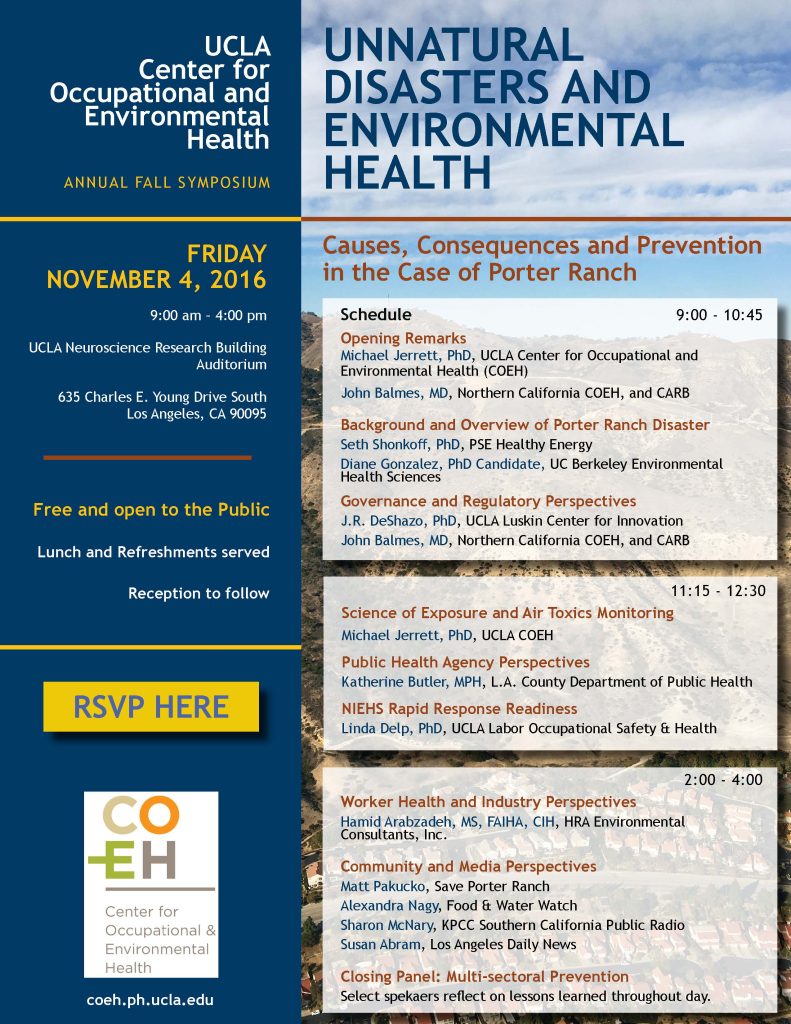 The symposium underscored how COEH in Northern and Southern California are working jointly with government agencies and the community to step-up the state’s ability to mount a rapid response to unforeseen disasters with the shared goal to protect public health and the environment.

Presenter Katherine Butler, an environmental epidemiologist with the Los Angeles County Department of Public Health, explained what it was like at her agency to receive hundreds of phone calls per day from community members sickened by the natural gas blowout, according to symposium organizer Christina Batteate, Outreach Coordinator for UCLA COEH.

Alexandra Nagy from Food & Water Watch described her efforts as a community advocate, while Matt Pakucko from Save Porter Ranch, Sharon McNary from KPCC Southern California Public Radio, and Susan Abram, Los Angeles Daily News emphasized the importance of perspectives from the community and the role of the news media in garnering attention and ultimately resources.

“A big lesson learned from Porter Ranch was that there wasn’t a coordinated, rapid response in place,” noted organizer Batteate. “So, what are the institutional steps necessary to make sure that health departments can respond as quickly as they need to protect people? Because of COEH’s quick willingness to put boots on the ground, it helped the County be more flexible and protective of the public in the chaos of that lack of a plan initially.”

“The event taught at least two lessons,” said Jerrett “First, we need ongoing monitoring around natural gas storage facilities for methane and air toxics. Second, the facilities are regular emitters of air toxics such as benzene and formaldehyde. So, beyond the uncontrolled leaks, these routine emissions could also be affecting the health of nearby residents. There is a critical need to conduct routine, ongoing health surveillance of neighboring residents to ensure they are not adversely affected by emissions from these facilities.”

Of note, UCLA COEH and the California Air Resources (CARB) are now collaborating on exposure monitoring and data collection at four new sites in the region. This baseline data will serve as a benchmark during any future air quality events to inform decision-making and disaster response.