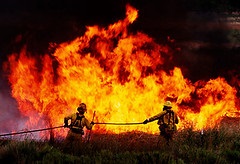 With wildfires expected to increase in frequency and intensity in California and elsewhere in the U.S., FSPH faculty address emerging public health concerns.

“During these fires in California, we see pollution levels that are more like Beijing, China, or New Delhi, India.”
— Michael Jerrett

THE CAMP FIRE that started on November 8, 2018 in Northern California’s Butte County burned through more than 150,000 acres and destroyed more than 18,000 structures over 17 days. Eighty-five lives were lost, making it the deadliest and most destructive fire in California history. The Woolsey Fire, which started the same day, blazed through nearly 100,000 acres in Los Angeles and Ventura counties, destroying more than 1,600 structures and forcing the evacuation of nearly 300,000 people.

The twin wildfire disasters were preceded in July 2018 by the Mendocino Complex Fire, the largest in the state’s history, which covered nearly 460,000 acres across four counties in Northern California. Before that, the largest was the Thomas Fire, which burned more than 280,000 acres in Ventura and Santa Barbara counties, in December 2017.

California’s wildfire season is starting earlier and ending later, and as the run of recent record setters suggests, the fires have increased in severity in recent years. There are reasons to suspect that climate change is an important factor. Most of the state’s hottest and driest years have occurred since 2000, and the longer spells without precipitation give vegetation more time to dry out and become more combustible. “Some areas of California are projecting a 200-300 percent increased risk by 2030 in wildfire events,” notes Michael Jerrett, professor and chair of the Fielding School’s Department of Environmental Health Sciences.

The public health threat from these fires is exacerbated by the considerable amount of real estate development that has occurred in recent years in traditionally fire-prone areas. A 2018 study found a 41 percent increase between 1990 and 2010 in the number of new homes built at the wildland-urban interface — described as where houses and wildland vegetation intermingle, and where wildfire problems are most pronounced. 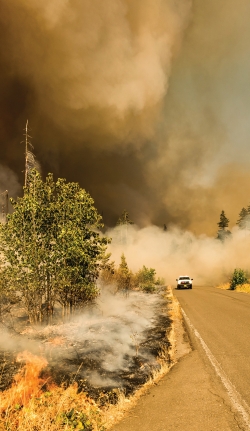 Beyond the threat to lives and property, these increasingly occurring disasters raise a number of public health concerns that Fielding School faculty are working to address.

Studying the health impacts of exposure to wildfire smoke is challenging given that the smoke levels are constantly shifting, which makes it difficult to determine where and at what levels residents are being exposed. In an effort to tackle the issue, Jerrett is part of a research group that has developed a machine-learning model incorporating satellite imagery, atmospheric chemistry models, ground-based information on pollution levels, and other factors known to influence pollution, such as traffic and land use, to predict with high levels of confidence the location of the smoke plume on a given day. In linking that information to data on hospital visits and admissions, Jerrett and his colleagues have found significant effects on respiratory disease during the wildfire period in the areas that experience steep elevations of fine particular matter — the small particles that can penetrate deep into the lungs.

Beyond the immediate health effects, Jerrett points to the need to better measure the ongoing chronic health impacts of wildfires that are occurring on a regular basis in or near major population areas. “During these fires in California, we see pollution levels that are more like Beijing, China, or New Delhi, India,” he says. “And as the fires are becoming both larger and more frequent, we’re interested in what it means to go through two or three of these events, where people are getting doused with Beijing levels of pollution for a month or so at a time.”

Much of the ash and particulate matter deposited in homes as a result of wildfires has the potential to transform into toxic gases that can affect health, Jerrett adds. “Our concern is that if people return to their homes without having them professionally cleaned by an industrial hygienist, they  could unknowingly expose themselves to unhealthy indoor air for months at a time.”

Jerrett is also working with Sudipto Banerjee, professor and chair of the Fielding School’s Department of Biostatistics, along with doctoral students Jonah Lipsitt and Gregory Watson (MS ’11), to develop so-called counterfactual models that would help to guide policies and strategic decisions during the fires. The FSPH researchers hope to shed light on issues such as the health impact of investing additional resources in reducing pollution levels during the wildfire, the optimal time to call for evacuations, and the public health consequences of residents ignoring those calls.

Dr. David Eisenman (MS ’02), professor in residence in the Fielding School’s Department of Community Health Sciences and director of the FSPH-basedCenter for Public Health and Disasters, is a practicing physician who has studied the public health impacts of wildfires and other disasters in an effort to inform strategies that enhance the preparedness for and response to these events. The distress that occurs in the wake of a wildfire — being displaced from one’s community and losing social supports, along with the associated psychological trauma — often endures long after the flames have been extinguished, Eisenman notes. He points out that although media coverage often shows fires affecting wealthy areas, the reality is that many communities in areas susceptible to wildfires consist of significant numbers of low-income workers and older adults on fixed incomes. “Often people will say we shouldn’t rebuild, that these are dangerous places, but to these residents this is their community and might be the only place they can afford to live,” Eisenman says.

Eisenman has learned that there can be significant longterm mental health effects from wildfires, even for people who experience no noticeable physical effects or property damage. When he was in Arizona immediately following the2011 Wallow Fire, the largest in that state’s history, Eisenman was struck by the strong attachment residents of the affected communities felt to the surrounding area that had been burned. “Everywhere we went, people said essentially the same thing — ‘I am mourning for the loss of the forest,’” Eisenman recalls. “What they meant was that they had moved to this beautiful U.S. Forest Service land to be part of nature, and it felt like they had lost something very deep and close to them.”

In the aftermath of the Wallow Fire, Eisenman and his colleagues found that “solastalgia” — a term referring to the loss of the solace people derive from their environment when it is damaged — was a strong predictor of poor mental health.
“This is important to recognize because in the case of wildfires, it can take a long time for the land to return to that level of function and beauty that brings the solace back to people,” he says. “And as climate change causes more and more longterm alterations to the environment, we might see solastalgia in other forms.”

Eisenman notes that during the Woolsey Fire, many residents chose to stay and defend their homes despite the urgings of public officials and firefighters that they evacuate. “These are people who might not have had any firefighter training or done anything to make their properties less flammable, but for the most part they are being applauded for their courage in getting on the roof to put out embers,” Eisenman says. “From the public health perspective, if this is going to become more of a phenomenon we should better understand the risks for everyone involved.”

The mental health effects of surviving a wildfire or other natural disaster tend to endure long after the television cameras have left. Vickie Mays, a professor in the Fielding School’s Department of Health Policy and Management, spent five years as part of a response and resiliency team that helped to rebuild the mental health infrastructure after Hurricane Katrina devastated New Orleans. “Being there several times a year over the course of several years provided a perspective on some of the scars that are left from these types of events,” Mays says.

She notes that in the weeks following a disaster, much of the focus is appropriately on tending to people’s short-term needs through counseling and social services, but long-term mental health consequences are too often overlooked. In many cases, Mays says, these relate to actions residents take during and immediately after the event. “It’s heartbreaking to see people haunted over decisions about whether to evacuate, particularly if it ends up going awry and affects other members of their family,” Mays says. After the disaster, she notes, survivors are often forced to quickly reach decisions about rebuilding, and many end up making commitments they later regret.

The level of cohesiveness within a community is a key factor in the post-disaster healing process, Mays adds. “When people’s lives are upended, the extent to which they are able to cope, make good decisions and return to normalcy has a lot to do with how well the neighborhood pulls together and supports each other,” she says. Support is needed not just for homeowners and renters, but also for others who are integral to the community but tend to be forgotten, including members of the informal economy such as gardeners and housecleaners, Mays adds.

Given all of these realities, Mays believes public health efforts should emphasize planning to assist people in making informed judgments during and after a disaster, and to ensure that neighborhoods build the social infrastructure that will facilitate a successful recovery process. “Offering counseling right after a disaster is certainly important,” Mays says. “But from a public health perspective we can do more by preparing communities in ways that limit the damage and enhance the recovery from these events.”