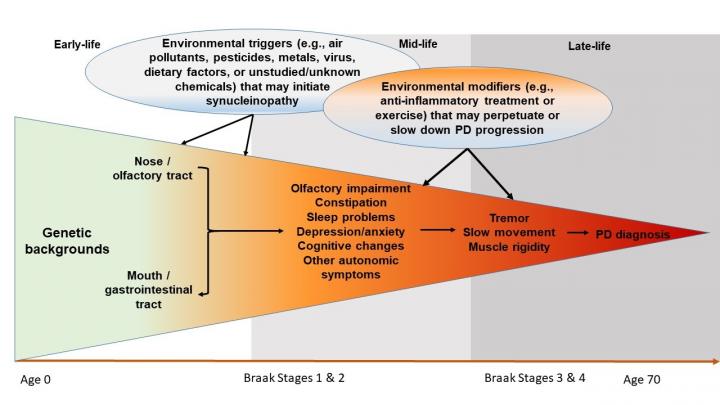 Amsterdam, NL, January 31, 2019 – Environmental factors are widely believed to play a key role in the development of Parkinson’s disease (PD), but little is known about specific environmental triggers. Writing in the Journal of Parkinson’s Disease, scientists review novel research hypotheses and approaches that may help better define the role of environment in the development of PD, especially before a diagnosis can be made based on the characteristic motor dysfunction for which PD is known.

PD is a slowly progressive disorder that affects movement, muscle control, and balance. Despite recent success in unveiling the genetic basis of late-onset sporadic PD, genetic findings may only explain a small portion of cases and cannot be easily extended to disease prevention. “The greatest risk factors for PD are likely environmental and not genetic,” stated Honglei Chen, MD, PhD, of the Department of Epidemiology and Biostatistics, College of Human Medicine, Michigan State University, East Lansing, MI, USA, and Beate Ritz, MD, PhD, of the Departments of Epidemiology, Environmental Health Sciences, and Neurology, Fielding School of Public Health, and Geffen School of Medicine, University of California Los Angeles, CA, USA. “Yet we know relatively little about environmental causes or triggers of PD onset and progression. Identifying these and defining ways to reduce their impact will be great research challenges for the coming two decades.”

Late-onset sporadic PD takes decades to develop, and by the time of diagnosis, some of the neurodegenerative changes are too advanced to slow down, stop, or reverse. On the other hand, environmental factors that cause or trigger its development and modify its progression may come into play during the “prodromal phase,” decades before specific signs and symptoms develop. “This prodromal stage is of major interest for prevention efforts,” explained the authors. “Targeting factors that enter the body via the nose or gut has become even more important since the discovery that the alpha-synuclein protein-related Lewy pathology, which is characteristic of PD, was identified in the nervous systems of the olfactory pathway and the digestive tract.”

During the past two decades, scientists have identified over a dozen environmental factors associated with the risk of developing PD, including pesticide exposures and traumatic brain injury. Other environmental exposures that have been noted as potential risk factors include organic solvents, high-temperature cooked meats and heterocyclic amines, respiratory and gastrointestinal infections, and inflammation in general. There are also reports on inverse associations between PD and smoking, coffee consumption, vigorous exercise, ibuprofen use, and plasma urate.

The authors review the current research, suggest future directions and discuss the potential of novel tools and theoretical frameworks for scientists to design future studies, such as gene-environment interaction and epigenetic approaches.

The Braak hypothesis presents a unique hypothetical framework for PD development that allows scientists to better conceptualize different steps in the pathogenesis of the PD prodrome and manifest PD. This can also help define the contributions of environmental factors to the different stages of the pathogenic process. The Braak hypothesis states that PD is caused by a pathogen that enters the body via the nasal cavity and subsequently is swallowed and reaches the gut, initiating Lewy pathology in the nose and the digestive tract. According to this hypothesis, PD Lewy pathology develops in six sequential stages, starting in the olfactory bulb or enteric nerves (or both), years if not decades, before spreading to dopamine neurons in the substantia nigra in the brainstem. Exposome Concept

Another concept described by the authors is the exposome, which represents the totality of human environmental exposures over an individual’s lifetime. The authors propose that, together with the Braak hypothesis, the exposome concept provides a theoretical framework for scientists to design future studies to decipher the environmental causes of PD and to develop early interventions that halt its progression to the characteristic motor and non-motor dysfunction in PD. 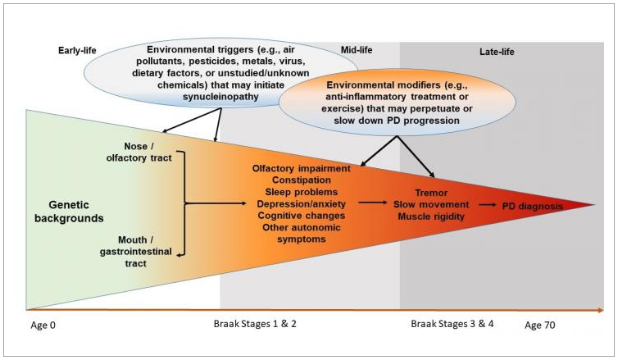 Possible contributions of environmental factors to different Braak stages of PD and the PD prodrome.

“The Search for Environmental Causes of Parkinson’s Disease: Moving Forward,” by Honglei Chen, MD, PhD, and Beate Ritz, MD, PhD (DOI: 10.3233/JPD-181493) published in the Journal of Parkinson’s Disease, Volume 8, Supplement 1 by IOS Press. It is openly available at https://content.iospress.com/articles/journal-of-parkinsons-disease/jpd181493.

ABOUT THIS SUPPLEMENT TO THE JOURNAL OF PARKINSON’S DISEASE

The Journal of Parkinson’s Disease published a special issue in 2017 to commemorate the 200th anniversary of James Parkinson’s “Essay on the Shaking Palsy,” and we highlighted eight of the most important advances in Parkinson’s research over the past 60 years. As we were working on that special issue, we commented on how the pace of Parkinson’s research has accelerated remarkably. We speculated that there would be more advances in the treatment and care of Parkinson’s disease during the coming 20 years than were evident during the preceding 200 years. Thus, the idea of a collection of short, forward-looking, and visionary articles was born. Eventually, we identified 19 topics for articles, and we are very excited about the outcome. In 1964 Bob Dylan sang “The Times They Are a-Changin’;” this special supplement clearly shows that the field of Parkinson’s is no exception. This supplement to is openly available at https://content.iospress.com/journals/journal-of-parkinsons-disease/8/s1

For additional information contact Diana Murray, IOS Press, at +1 718-640-5678 or d.murray@iospress.com. Journalists wishing to interview the study’s authors should contact Honglei Chen at chenho@epi.msu.edu or Beate Ritz at britz@ucla.edu.