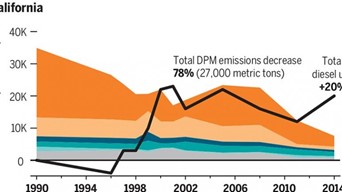 California’s trailblazing rules have cleaned up diesel exhaust more than anywhere else in the country, reducing the estimated number of deaths the state would have otherwise seen by more than half, according to new research published today.

The policy analysis, led by scientists at the University of California and state agencies, investigated how California’s efforts to clean up trucks, buses, ships and heavy equipment stacked up against the rest of the country’s policies over a 24-year stretch.

The report, published Thursday in the journal Science, shows that the state’s rules have led to substantial improvements even as diesel fuel use has increased and California’s economy and population has grown.

“When I started doing this work 20 years ago, it just seemed daunting to think that you could make a change in air pollution. It just seems so intractable,” said study author Álvaro Alvarado, a scientist at California’s Office of Environmental Health Hazard Assessment who previously worked at the state Air Resources Board. “It is gratifying to know that your work has real impact.”

Michael Méndez, an assistant professor of environmental planning and policy at the University of California, Irvine, who was not involved in the research, commended the study and the progress it captured. “It was a really great example of how California is continuing to be a global leader around climate change and public health,” said Méndez, author of Climate Change from the Streets.

Still, he said, there’s more work to be done to clear California’s air.

“It’s never enough. California can always do better,” he said, particularly when it comes to protecting people in disadvantaged communities near ports, freeways and other sources of diesel pollution.

Because California still has the worst air quality in the nation, it faces the biggest challenge to meet federal health standards and has led the way in pioneering rules to cut soot and smog.

It is the only state that has the authority under the Clean Air Act to set its own emission standards for cars and trucks. The Trump administration revoked the state’s power to regulate greenhouse gases from passenger vehicles, but President Joe Biden is expected to restore it.

But California, the nation’s biggest diesel polluter, cut emissions by 78% percent, despite a 20% increase in diesel fuel use, the study reported. That means California’s engines were burning cleaner.

Diesel exhaust contains an array of pollutants, including fine particles that can lodge in lungs and travel into the bloodstream. These tiny pieces of soot and other materials can trigger heart and asthma attacks, and are linked to lung cancer.

The researchers report that excess deaths from heart and lung disease linked to diesel pollution dropped by 82% in California during that time. The team estimates that if the state had followed federal rules only, diesel particles would have contributed to the deaths of 1,330 Californians in 2014 — more than double the estimated total of 596. (The figures are projections, based on studies that link pollutant levels to increased premature deaths.)

That’s probably an underestimate of the benefits, the researchers say. Diesel exhaust is also a carcinogen, and the team did not investigate deaths from cancer or the general lung health of people who grew up inhaling the fug of diesel around freight corridors.

“We’ve given one little snapshot of one type of impact of diesel particulate matter,” said Megan Schwarzman, a physician and environmental health scientist at the University of California Berkeley.

Michael Jerrett, a professor of environmental health sciences at UCLA’s Fielding School of Public Health who was not involved in the study, said “the argument is quite convincing.”

Multiple authors of the study work for state agencies and one, a professor of medicine at the University of California, San Francisco, is a member of the California Air Resources Board. But Jerrett said he’s “not very concerned” about their roles influencing the analysis.

Read the full story at: https://www.abc10.com/article/news/local/california/calmatters/new-study…