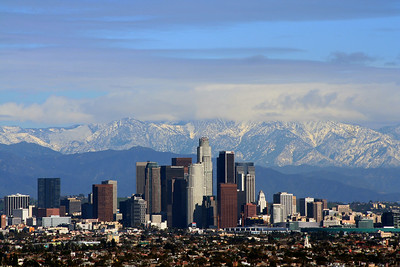 One of the few uplifting developments in the early weeks of the COVID-19 pandemic was the remarkable boost in air quality around the world. As restrictions stilled cars, planes and boats, the change was so dramatic that a viral hoax claiming Italy’s newly pristine Venetian canals had attracted dolphins seemed no less plausible than a true story that Los Angeles, at least for a day, had the cleanest air in the world.

Did the clean air mean anything? Was it evidence that collective action could clean the air faster than many thought possible, or just a fluke of the weather, or proof that even radical steps couldn’t fight climate change? The answer, UCLA air quality researchers say, isn’t precisely any of these but includes elements of all three.

A December 2020 study led by UCLA professor Yifang Zhu found that while favorable spring weather helped, traffic reductions in Los Angeles last March and April were directly responsible for a roughly 30% decrease in nitrogen oxides, a common tailpipe emission. Once the lull in traffic ended, however, the pollutants returned.

“The good air quality can’t last if traffic-emission reductions don’t last,” said Zhu, a professor of environmental health sciences and senior associate dean for academic programs at UCLA’s Fielding School of Public Health. “What our paper shows is that if we can find a sustainable, equitable way for people to drive less and telework more, there are significant air quality benefits from it.”

The study created traffic models based on transportation data from 2017 to 2020, allowing the researchers to pinpoint which improvements were caused by an absence of vehicles and which were caused by weather, such as the abundance of spring showers last March and April. As any Angeleno knows, rain is the quickest way to clear the air.

“Lots of people asked me at the time about the clean air, and I said it’s great, but there’s also a meteorology component,” Zhu said. “When we fed meteorology into the model and controlled for its impacts, we still saw a good amount of reductions, so the traffic decrease turned into real air quality benefits.”

Read the full story at: https://newsroom.ucla.edu/releases/air-quality-a-year-after-covid-lockdowns