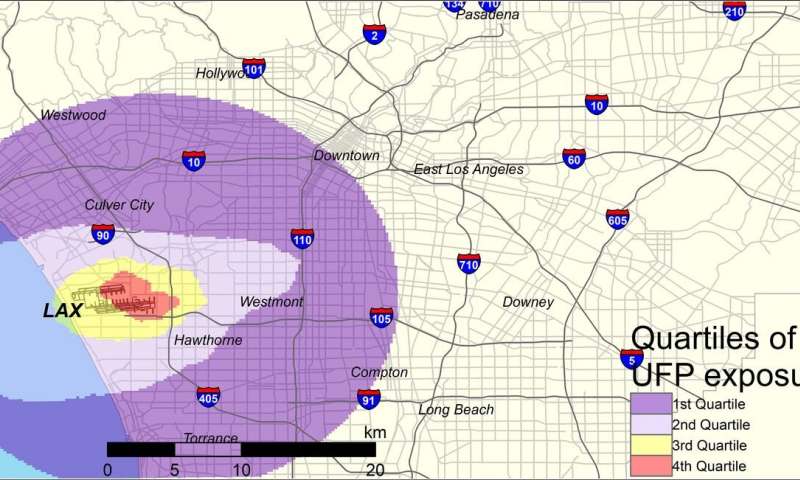 A study from the UCLA Fielding School of Public Health has found that pregnant women exposed to high levels of ultraﬁne particles from jet airplane exhaust are 14% more likely to have a preterm birth than those exposed to lower levels.

The researchers examined exposure among women living near Los Angeles International Airport, in an area that includes neighborhoods in Los Angeles, El Segundo, Hawthorne, Inglewood and several other communities inland from the airport.

“The data suggest that airplane pollution contributes to preterm births above and beyond the main source of air pollution in this area, which is traﬃc,” said Dr. Beate Ritz, a professor in the departments of epidemiology and environmental health sciences at the Fielding School.

The research team, co-led by Ritz and Scott Fruin of the Keck School of Medicine at the University of Southern California, examined records for all births—a total of 174,186 —between 2008 and 2016 to mothers living within nine miles (15 km) of LAX. They divided the overall area into four sections based on the amount of ultrafine particle, or UFP, pollution from jet exhaust, with the section nearest the airport experiencing the highest exposure.

After adjusting for traﬃc-related air pollution and other variables that may aﬀect the risk of preterm birth, including airport-related noise and the mother’s age, education level and race, they found that expectant mothers in the quarter with the highest average ultraﬁne particle exposure had 14% higher odds of a preterm birth than mothers in the quarter with the lowest exposure.

“Nearly 2 million people live within a 10-mile radius of LAX, many of whom are exposed to elevated levels of aircraft-origin UFPs,” said Sam Wing, a scholar at the Fielding School who also worked on the study.

The research is summarized in an article published July 22 in the journal Environmental Health Perspectives and is based on a lengthy study from the spring 2020 edition of the journal. Other authors include Timothy Larson and Sarunporn Boonyarattaphan of the University of Washington and Neelakshi Hudda of Tufts University.