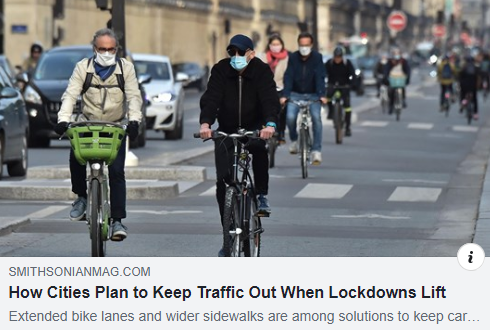 When cities put stay-at-home orders in place, traffic plummeted. And some cities, like Paris and Milan, have plans to support the limit automobile use long after the lockdowns end.

The purpose of the policies is to fight local urban air pollution, particularly smog, which is caused by the chemicals in automobile emissions. Milan plans to turn over 21 miles of streets into bike lanes, and Brussels is converting its city core to a priority zone for pedestrians and cyclists, Francesca Perry reports for the BBC. Paris’ mayor Anne Hidalgo has supported car reduction policies for years, following a decades-long push in the city to pedestrianize the city, Laura Bliss reported for CityLab in 2018.

She said at a Paris City Council special session last month that the pandemic won’t change her plans, which include phasing out diesel cars by 2024 and transitioning to only electric or hybrid vehicles by 2040.

“I say in all firmness that it is out of the question that we allow ourselves to be invaded by cars, and by pollution,” Hidalgo said, per CityLab’s Feargus O’Sullivan. “It will make the health crisis worse. Pollution is already in itself a health crisis and a danger — and pollution joined up with coronavirus is a particularly dangerous cocktail. So it’s out of the question to think that arriving in the heart of the city by car is any sort of solution, when it could actually aggravate the situation.”

Hidalgo’s plan to reduce car usage in Paris also aims to make the space more friendly for pedestrians and cyclists by building wider sidewalks, adding greenery and creating protected bike lanes that extend into the suburbs, according to CityLab. Paris accelerated its plans to construct the long-distance bike lanes because of the pandemic.

As Bloomberg reports, commuters in cities like Beijing and Frankfurt, which have begun to reopen, chose to sit in traffic rather than take public transportation in order to avoid exposure to the coronavirus.

To avoid the same in Paris, the city created temporary bike lanes that follow public transit lines, providing a car-free option for people hesitant to use the shared service. The Paris metro will also provide hand sanitizer at all ticket barriers and require riders to wear masks, and bus services will also be expanded to avoid crowding.

“The pandemic challenges us, but it also offers a once-in-a-lifetime chance to change course and repair the damage from a century of car-focused streets,” says Janette Sadik-Khan, a former New York City transportation commissioner, to the BBC. Sadik-Khan now works with cities creating transportation recovery programs. “Cities that seize this moment to reallocate space on their streets to make it easier for people to walk, bike and take public transport will prosper after this pandemic and not simply recover from it.”

In March, the start of lockdowns and the resulting drop in traffic were joined by a drop in urban air pollution. However, a new analysis by NPR shows that the drop in car traffic leaves a clearer picture of how much pollution comes from other factors like delivery trucks, chemical plants and coal plants in Los Angeles, Houston and Pittsburgh. Though tailpipe emissions fell, the cities’ smog and soot didn’t drop dramatically.

“We don’t need a pandemic to breathe cleaner air,” says University of California, Los Angeles public health specialist Yifang Zhu to NPR. “There is a sustainable way for a society to achieve a cleaner world in the future. We need to do more than we’re doing right now.”

Originally published May 21, 2020 at https://www.smithsonianmag.com/smart-news/some-cities-want-keep-traffic-out-when-lockdowns-lift-180974917/