Through the 1960s and 1970s, the Los Angeles basin was notorious as one of the world’s smoggiest regions. Since then, population in the sprawling metropolitan area has roughly doubled, energy consumption has soared as the region has become a global economic hub, and despite efforts to get people to carpool and use public transportation, vehicle miles traveled have approximately tripled. But as anyone who lived in the L.A. basin then and now can plainly see, the air is considerably cleaner.

The data support the visuals. Los Angeles meets the standards set by the U.S. Environmental Protection Agency (EPA) for four of the six air pollution criteria it regulates: carbon monoxide, nitrogen dioxide, sulfur dioxide and lead. For the other two, ozone levels have been reduced by approximately two-thirds from peak levels, and the basin is close to meeting the standard for ﬁne particulate matter after once exceeding it by several-fold.

“Los Angeles shows that with the right policies, even a mega-city can make major improvements while experiencing economic growth,” says Dr. Michael Jerrett, professor and chair of FSPH’s Department of Environmental Health Sciencesand an expert in air pollution exposures and health effects.

The dramatic turn has resulted from the aggressive regulatory policies of the EPA; the South Coast Air Quality Management District (SCAQMD), which regulates stationary pollution sources in Southern California; and the California Air Resources Board (ARB), Jerrett says. In particular, the ARB, which regulates pollution from mobile sources, has enacted strict motor vehicle emission controls that have led to cleaner fuels and have driven technological advances to substantially reduce the pollutants from tail pipes.

Not to be overlooked are the critical contributions of the Fielding School, where faculty research and expertise have informed the policies, and where students have been prepared for leadership positions at the regulatory agencies. “The ARB has led the world in supporting technology and measures that reduce emissions across the spectrum,” says Dr. Arthur Winer, FSPH professor emeritus of environmental health sciences and an expert in air pollution and exposure assessment. “At the same time, it has supported the best academic researchers in California, and used the science and engineering from that research to establish cost- and policy-effective measures.”

These advances have resulted in a healthier population. Poor ambient air quality consistently ranks among the top handful of risk factors for premature death, and is associated with greater susceptibility to conditions that include childhood asthma, reduced lung function, cardiovascular disease and poor birth outcomes. Among the many important contributions of Fielding School faculty to the science and policies that have helped to reduce such risks:

» Both Winer and Dr. Yifang Zhu, FSPH professor of environmental health sciences, have published inﬂuential ﬁndings on the level of exposure to air pollutants near freeways. Winer’s group found that the radius of exposure to the vehicle emissions extended farther than believed, particularly during the early-morning hours. Zhu, starting with her dissertation at the Fielding School under the mentorship of Dr. William Hinds, FSPH professor emeritus of environmental health sciences, has conducted studies showing that tiny (ultraﬁne) particles are highly concentrated downwind of freeways. The research by Zhu, Hinds, Winer and others focused the attention of health- effects researchers and policymakers on the importance of air quality impacts in proximity to roadways.

» In the early 2000s, a Winer- led group documented signiﬁcant air-quality concerns inside diesel- powered school buses, showing that students aboard the buses were exposed to dangerous levels of diesel exhaust. The research contributed to actions by the EPA and ARB to retroﬁt school buses with pollution-reducing devices and to replace diesel with cleaner fuels. In recent years Zhu’s lab has built on those ﬁndings with studies indicating that even after emissions from the buses’ tailpipes are minimized, occupants remain vulnerable to exposures from other vehicles. Zhu’s team has been studying a prototype school bus air ﬁltration system, with encouraging results. 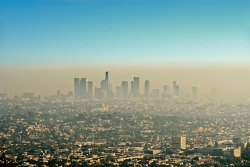 FSPH faculty members have also helped to delineate the health effects of air pollution exposures. Jerrett is widely recognized as a leader in the use of geographic information science for both assessing exposures and determining the health risks of various exposure levels to pollutants through the ﬁeld known as spatial epidemiology. He and his colleagues were among the ﬁrst to document an elevated cardiovascular risk in high-pollution areas, as well as markedly increased odds of asthma and impaired lung function among children living close to roadways.

Dr. Beate Ritz, FSPH professor of epidemiology, conducted pioneering research on the health effects of traffic-related air pollution, including landmark studies showing that living near heavily traveled roads increases the risk of adverse birth outcomes, along with one of the largest studies ﬁnding an association between air pollution and autism. Ritz has also led seminal epidemiological and laboratory research demonstrating the toxic effects of pesticides and increased susceptibility to Parkinson’s disease among farmworkers and others in California’s Central Valley. Following up on her ﬁndings, she has led a successful effort to ensure funding for the development of the California Parkinson’s Disease Registry, increasing the ability to monitor the risk associated with suspected chemical agents.

Dr. John Froines, FSPH professor emeritus of environmental health sciences, has published fundamental research contributing to the understanding of how air particles, once ingested into the lungs, lead to inﬂammation, oxidative stress and impaired cellular function. As director of the multidisciplinary Southern California Particle Center and Supersite, funded by the EPA, Froines headed or participated in numerous studies that created a roadmap for how the pollutants lead to poor health outcomes — work that has been widely cited in policy setting arenas.

In addition to informing air pollution policies through their research, FSPH faculty have played hands-on roles through their service on key committees. Among others, Froines contributed to key policies on pesticides and other air contaminants through his leadership on ARB’s Scientiﬁc Review Panel on Toxic Air Contaminants, on which Ritz is a current member. Both Jerrett and Ritz have served on the EPA’s Clean Air Scientiﬁc Advisory Subcommittee. Winer served on numerous policy-setting committees over the course of his career.

Zhu, who has collaborated with researchers at Peking University in China on research seeking to guide policymakers on cleaning the air in Beijing, notes that representatives from around the world have visited the Fielding School to draw lessons from Los Angeles. “The climate, topography and car culture all make the L.A. basin highly susceptible to air pollution problems,” she says. “But the success Los Angeles has had in improving the air quality makes this region a model for others.”