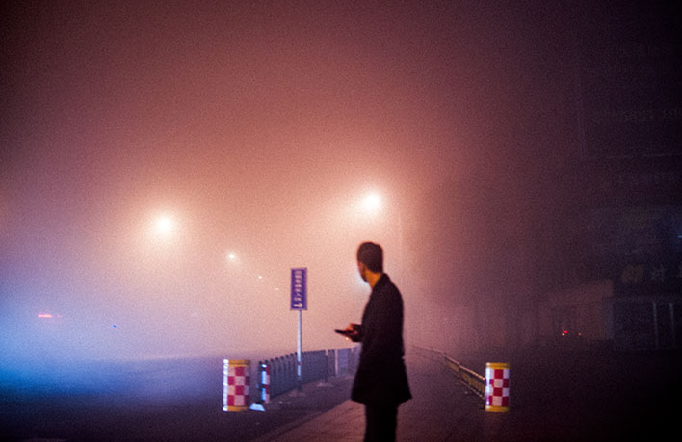 The Clear Thing About China’s Smog
The air pollution that plagues Beijing and other cities worldwide can have short-term and long-term health consequences.

Beijing’s air pollution makes for a well-rounded sensory experience: There’s the sight of the brown haze rolling into the Chinese capital, the sound of the traffic churning underneath it, and a physical feeling, often in the form of “the Beijing cough” – a dry hacking accompanied by an itchy throat.

In terms of air pollution, Beijing and surrounding areas have had a rough winter. In December, the government issued a red alert, its most severe warning in its four-tier system. Schools were closed. Flights were canceled. Construction projects crawled to a halt. Just days ago, the government announced plans to decrease coal consumption and create a new police force to combat the pollution. And for good reason: The health effects of smog go far beyond a nagging cough.

Beijing’s smog isn’t killing thousands right away like the infamous Great Smog of London in 1952 – medical treatment has evolved since then and the chemical makeup of the pollution is different. But the air pollution can trigger short-term effects like heart attacks, asthma attacks and bronchitis, says Dr. Ray Casciari, a pulmonologist with St. Joseph Hospital in Orange, California. There’s also a risk that thick smog can cause deadly traffic incidents, much like the one that killed Winston’s Churchill’s fictional secretary in episode four of “The Crown.”

That said, most experts say short-term travel to Beijing is fine for healthy adults.

Yifang Zhu, a professor of environmental health sciences at the University of California Los Angeles, tracks about a dozen UCLA students who study in Beijing for 10 weeks each summer. When they return, she does research on them, testing their urine to see how they’ve been affected by air pollutants. While she can see evidence of the pollution, she says the short-term effects in her students are reversible.

But for the elderly, children and people with existing health conditions, it’s a different story. In those cases, it’s best to avoid exposure, says Terry Gordon, a professor of environmental medicine at NYU Langone Medical Center.

“If you are a healthy person, you have less reason to be concerned,” he says. “But if you are elderly or a child with asthma, you probably should be.”

While the short-term effects of air pollution are concerning, it’s the long-term consequences that really worry researchers. In 2012, 3 million people worldwide died from air pollution-related health effects, according to a recent report from the World Health Organization. In China, more than a million people lost their lives – the highest number of any country.

Air pollution can cause lung disease and cardiovascular disease, as well as cancer and birth defects, says Zhu. But it’s hard to gauge the depth of the health consequences of China’s smog for several reasons, she says.

For one, such high levels of air pollution are a relatively recent phenomenon, and long-term health consequences take time to develop. Secondly, most studies about air pollution-triggered health effects have been conducted in environments with much less pollution than exists in China today.

In Beijing, officials are primarily concerned with fine particles of air pollution which come mostly from combustion sources. The poisonous particles, known as PM2.5, are small enough they can bypass human mucus and make their way into the lungs. The World Health Organization says PM2.5 levels are safe around 25 micrograms per cubic meter. In December in Beijing, levels were 15 times the guidelines, according to the Associated Press.

Severe air pollution is not a problem limited to China. In fact, other areas in the developing world have it worse. The highest urban air pollution levels are recorded in low-and middle-income countries in the Eastern Mediterranean and Southeast Asia, according to the WHO. Cities in countries like Iran and India actually have worse pollution than Beijing, according to a Washington Post analysis based on WHO data.