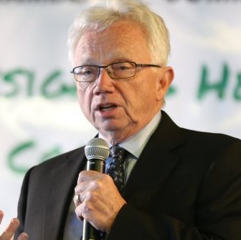 About the lecture: Dr. Jackson will outline how a strong base in environmental public health (EPH) prepares its students for careers that powerfully interface with law, economics, human personal and economic development, disease prevention, and of course preventive medicine and health care.

About the speaker: Richard Joseph Jackson is Professor emeritus at the Fielding School of Public Health where he was Department Chair in Environmental Health Sciences. He now co-teaches extensively at UCB SPH. A pediatrician, he has served in many leadership positions with the California Health Department, including the highest as the State Health Officer.  For nine years he was Director of the CDC’s National Center for Environmental Health and received the Presidential Distinguished Service Award.  In October, 2011, he was elected to the National Academy of Medicine of the National Academy of Sciences.

He has received its Hero Award from the Breast Cancer Fund; Lifetime Achievement Awards from the Public Health Law Association and from the New Partners for Smart Growth; the John Heinz Award for national leadership in the Environment; the Sedgwick Memorial Medal, the highest award of the American Public Health Association for Distinguished Service.  In 2015 he received the Henry Hope Reed Award for his contributions to Architecture.

Dick Jackson co-authored the books: Urban Sprawl and Public Health, Making Healthy Places, and Designing Healthy Communities for which he hosted a four hour PBS series.. He is an elected Honorary Fellow of American Institute of Architects and elected Honorary Fellow of the American Society of Landscape Architects. Jackson lectures widely across multiple disciplines and has testified before the US Congress and California Legislature many times.