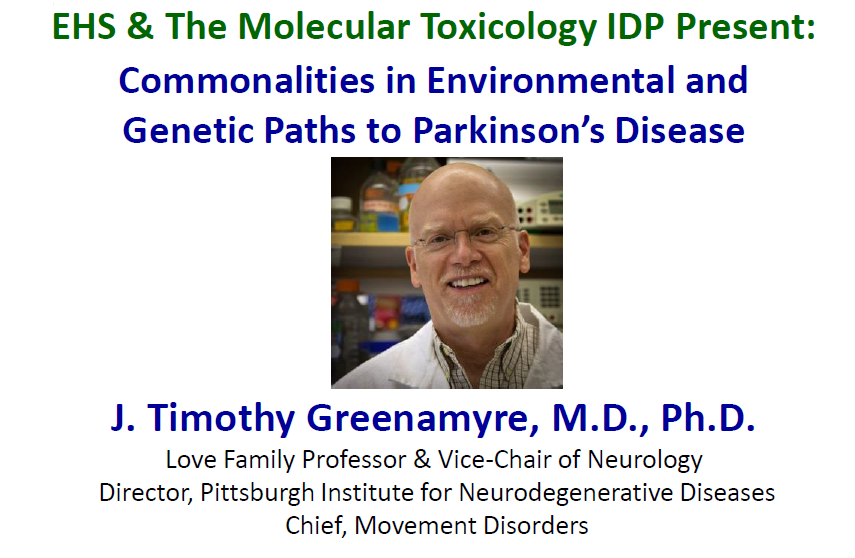 About the lecture: Genetic factors play a strong role in Parkinson’s disease (PD), but monogenic causes of PD account for only about 10% of cases. The other 90%, termed ‘idiopathic’ PD (iPD), do not have as clear a genetic determinant and are widely believed to have a strong environmental influence. Evidence will be presented that putative environmental triggers of iPD, such as pesticides, can “activate” gene products and pathways implicated by genetic studies of PD. Additionally, genes implicated in PD can strongly influence the toxicity of environmental toxicants implicated by epidemiological studies. Thus, there are pathogenic commonalities between genetically-determined and idiopathic PD that may be exploited for neuroprotection or disease modification.

About the speaker: Dr. Tim Greenamyre is the Love Family Professor and vice-chair of neurology, chief of Movement Disorders, and director of the Pittsburgh Institute for Neurodegenerative Diseases (PIND) and the American Parkinson Disease Association Advanced Center for Parkinson’s Disease Research at the University of Pittsburgh. He is a member of the Scientific Advisory Board of the Michael J. Fox Foundation, and a member of the scientific advisory boards of the Parkinson’s Foundation and the American Parkinson Disease Association. He has been listed as one of the ‘Best Doctors in America’ since the mid-1990s. He is editor-in-chief of the scientific journal Neurobiology of Disease and Faculty Member of F1000Prime. His laboratory studies mechanisms of neurodegeneration in Parkinson’s disease, with a focus on gene-environment interactions. Translational studies use pharmacological and ‘gene therapy’ approaches.