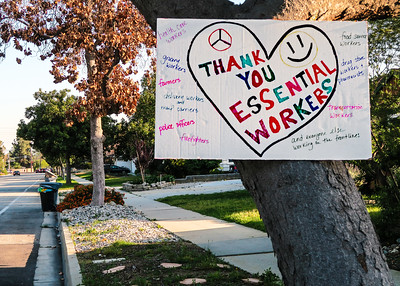 Millions of Californians with “essential” jobs are still going in to work.

Unlike other workers, who can hunker down at home and do their jobs in front of a computer screen, they must still interact with their co-workers and, often, the public. In some cases, such as on production lines, social distancing can be nearly impossible.

So what can workers do if they believe their employers aren’t adequately keeping them safe from potential exposure to the coronavirus? The state agency that enforces workplace safety is backlogged with complaints related to COVID-19 hazards, worker advocates say. But there are still some things to try.

First, the basics. What personal protective gear are workers entitled to?

The U.S. Occupational Safety and Health Administration requires employers to provide workers with personal protective equipment to keep them safe on the job.

The type of gear depends on the risk of exposure.

Workers who are exposed to confirmed or suspected COVID-19 cases and are performing jobs that can aerosolize the virus — intubating a patient, for example, or performing an autopsy — should wear a respirator, eye protection, gloves and gown, according to the Centers for Disease Control and Prevention.

The same gear recommendation applies for doctors, nurses and healthcare support staff who enter the room of a COVID-19 patient, medical transport workers and mortuary workers, the CDC says. But with the shortage of N95 masks, which filter air as it goes in and as it goes out, the CDC advises giving N95s only to workers who perform tasks that carry the most risk of aerosolizing the virus, and providing less-protective surgical masks to people who do other jobs.

The CDC recommends cloth masks for workers who are exposed to travelers or who have jobs at grocery stores or other high-volume retail environments where they are within six feet of people who may be infected.

“The ‘everybody wear a face mask’ thing is actually important and works when literally everybody wears a face mask,” said Paula Cannon, a professor of molecular microbiology and immunology at the USC Keck School of Medicine. “Part of the purpose of your mask or face covering is to hold in your own respiratory droplets and prevent you from infecting other people.”

The CDC says grocery workers need to wear gloves only if they work in food preparation. They all need to maintain proper hand-washing hygiene, which can include regular use of hand sanitizer, according to the agency.

Gloves are most useful when the wearers are conscious of what they touch, how they remove the gloves (turn them inside out, touching only the inside) and how often they put on a new pair (after finishing a task), Cannon said.

There’s no point in wearing gloves if wearers still rub their eyes or touch their faces, she said. “Gloves work only when you don’t treat them like an outer layer of skin.”

Workers in warehouses, stockrooms and similar nonpublic areas should wear cloth face masks, per the CDC’s guidance, but according to OSHA they don’t need additional gear to protect them from the coronavirus at work as long as they have minimal contact with co-workers.

Should I approach my employer with concerns about coronavirus exposure?

Not by yourself, according to worker advocates.

“If there’s an issue in the workplace, never address something on your own with an employer,” said Alice Berliner, coordinator for the Southern California Coalition for Occupational Safety and Health, an advocacy group. “That is when you’re most vulnerable.”

It’s best for workers to approach their supervisor in a group so they can communicate that the issue is a collective problem.

In addition, a group of workers who speak out to their employer about health and safety concerns have some legal protection against retaliation, said Laura Stock, director of the Labor Occupational Health Program at UC Berkeley.

Under California law, workers also have the right to refuse hazardous work, but labor advocates advised thinking carefully before choosing this option.

“Employers can retaliate, and that retaliation may be illegal, but its consequences will likely be very immediate,” said Stephen Knight, executive director of Worksafe, a worker advocacy group. “Any redress will take much longer to pursue with the system.”

So who should I reach out to for support?

Labor experts say workers can talk to their coworkers about what they’ve noticed and questions they have about health and safety issues.

“If there’s any overarching principle … it would be: Don’t go it alone,” said Linda Delp, director of the UCLA Labor Occupational Safety and Health Program.

If unionized, workers can also reach out to their union representatives. Collective bargaining agreements can include health and safety provisions. In some cases, that language might go beyond what’s required by law.

For example, a Northern California grocery store union met with company management to talk about health and safety issues, which led the company to offer to install plastic shields at checkstands, said Jim Araby, director of strategic campaigns for United Food and Commercial Workers Local 5.

Workers who are not represented by a union can reach out to worker centers or community advocacy groups, such as the Garment Worker Center, the Warehouse Worker Resource Center, the Los Angeles Black Worker Center and the Koreatown Immigrant Workers Alliance, for advice and connections to resources.

Can I file a Cal/OSHA complaint?

Yes. Workers have the right to file a complaint with the state’s Division of Occupational Safety and Health, known as Cal/OSHA. The agency is to keep the person’s name confidential unless the person requests otherwise.

After receiving a well-documented and strong complaint about a hazard in a workplace, a Cal/OSHA inspector typically goes out to the work site to investigate. The inspector will also interview employees there to hear more about the working conditions. If there’s enough evidence, Cal/OSHA could issue the employer a citation, which includes a fine. The entire process can take months, but sometimes just the threat of a visit from a Cal/OSHA inspector will lead an employer to fix problems, UC Berkeley’s Stock said.

Cal/OSHA did not respond to a request for comment asking for an estimate of the number of complaints it has received in light of the coronavirus outbreak and how many it has investigated.

“It’s really important that the state and Cal/OSHA know that COVID cases are still happening in workplaces, that workers are still being put at risk,” she said. “If Cal/OSHA complaints were to stop … it could be perceived that there isn’t as much of an issue.”

Workers can also follow up with Cal/OSHA after filing the complaint and ask about its status, UCLA’s Delp said.

Are there other options?

Workers who believe their workplaces are not operating safely can also file a report with their county’s department of public health. Unlike Cal/OSHA, which focuses on workers’ rights, these county departments are focused on protecting the public’s health, Worksafe’s Knight said.

“It becomes an issue that’s also about your situation but also is a real mushrooming public health concern because of the exposure of so many other people,” he said.

Workers can also try contacting media organizations if their workplaces have a number of COVID-19 cases, Berliner said.

Could a lawsuit lead to workplace changes?

It could, though building a solid case would take a lot of documentation as well as witness and expert testimonies.

If a court finds that an employer violated a broad civil statute known as business and professions code section 17200, the company could be fined and a judge could help fashion a settlement agreement that would mandate changes.

“You can get specific requirements that the employer has to abide by to protect their workers that are tailored to the situation,” said Fran Schreiberg, who was chief of Cal/OSHA’s investigations bureau in the early 1980s.

This type of case could be brought by a private attorney, a local prosecutor or the state’s attorney general.

For this type of case to succeed, she said, an attorney would have to prove that the worker was exposed, that there was a realistic possibility of death as a result of the exposure and that the employer should have known about and corrected these unsafe conditions.

What if my co-workers have tested positive for COVID-19?

Cal/OSHA recommends that anyone whose co-workers test positive for the coronavirus should contact their local public health department for guidance. CDC guidelines direct employers to inform workers if there has been a confirmed case of COVID-19 infection within the workplace, but they are required to maintain confidentiality — not announce the infected worker’s name. Employers should identify potentially exposed employees and alert them directly.

If the workplace followed guidelines on personal protective equipment and hand hygiene, then the risk of transmission is reduced, USC’s Cannon said.

But anxiety could still set in. Cannon suggested looking into getting tested for the virus. People can also practice additional social distancing at home, she said, by telling their families that their co-worker was infected, and sleeping in a separate room if possible.