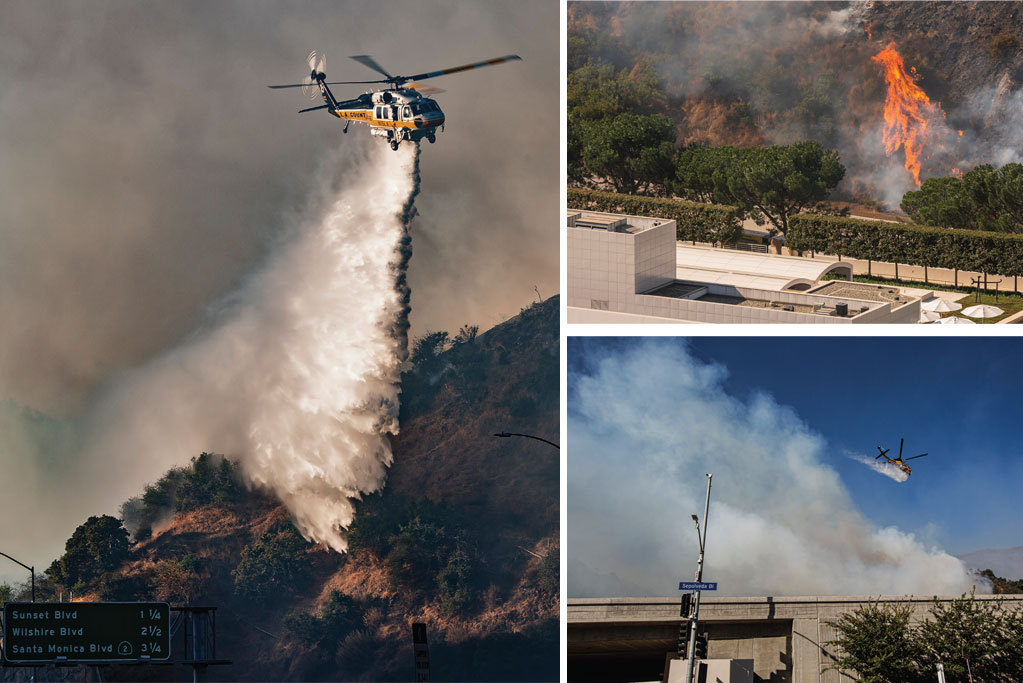 As of Tuesday evening copy deadline, The Getty Fire had burned 656 acres, destroyed 12 homes and forced the mandatory evacuation of nearly 7,100 homes west of the 405 Freeway, north of Sunset Boulevard, south of Mulholland Drive and east of Temescal Canyon Road. Containment was at 15%, with the voluntary evacuation warning zone extending westward to Topanga Canyon Boulevard and continuing school closures throughout Brentwood, Pacific Palisades and Malibu.

Forecasts of “Extreme Red Flag” winds 30 to 50 miles per hour — with gusts up to 70 miles per hour — threatened to create conditions “as dangerous for fire growth and behavior as we have seen in recent history,” according to a Los Angeles Fire Department briefing. More than 760 firefighters, including 123 fire engines, 14 hand crews and two bulldozers, were stationed overnight in vulnerable areas.

All it took to start the blaze, investigators had already determined, was a tree branch falling on powerlines.

On Monday and Tuesday, smoke advisories stretched for miles, including Santa Monica in particular and other parts of The Argonaut’s coverage area immediately south of the evacuation zones.

Impacts of the Getty Fire and others like it — including the Tick Fire in Santa Clarita and the 76,000-acre Kincade Fire that prompted evacuation orders for 200,000 residents of Sonoma County — will be felt for years, said Loyola Marymount University biology professor Eric Strauss, executive director of the LMU Center for Urban Resilience.

“It can take at least 10 years for [trees] to recover and grow again,” Strauss said. “Also in some cases the soil profile could be damaged, and that slows down the recovery time. During a heavy rain a damaged soil profile can lead to mudslides.”

Early 2018 mudflows in Santa Barbara County that followed the Thomas Fire caused 23 deaths and more than $200 million in property damage.

“Usually within 24 hours we see increases in hospital visits and psychiatric or mental health struggles. We often see these elevations persisting for weeks,” Jerrett said. “Even though atmospheric conditions can clear up quickly, the effects on health can persist.”

Originally published by The Argonaut on October 30, 2019 at https://argonautnews.com/california-burning-the-getty-fire/
Photos by Ted Soqui