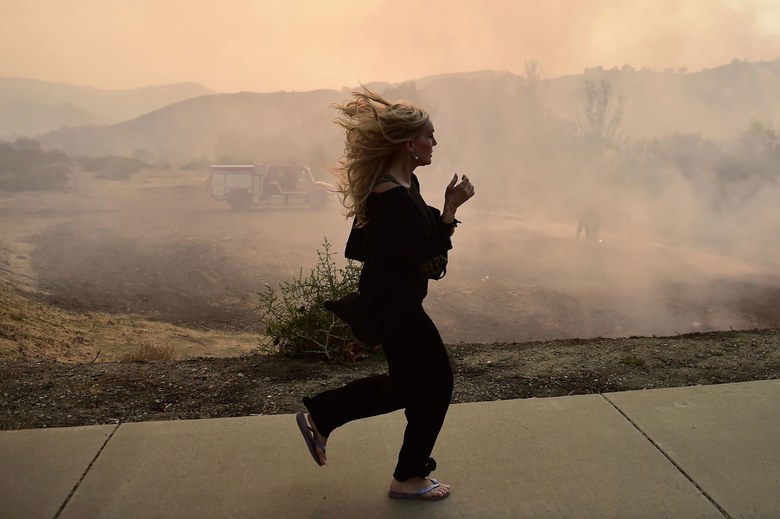 For Those Grappling With California Wildfires, Dangerous Air Quality Is a New Risk
NOVEMBER 16, 2018 3:26 PM
by CALIN VAN PARIS

California is still on fire. As of this morning, the Camp Fire in Butte County has burned up 142,000 acres and over 12,000 structures. Sixty-three people are dead and more than 600 are missing. And down south in Los Angeles County, the Woolsey Fire has destroyed 616 structures, with 57,000 still in danger and three fatalities confirmed. Though the numbers alone are breathtaking, there’s something else affecting our respiration: the air quality, which, yesterday in San Francisco, became among the worst in the world.

I live in Sonoma County, home to two of last year’s most destructive wildfires in Northern California—8,900 structures, 245,000 acres, 44 people, all gone. Still, the residual smoke that lingers in the air this week somehow seems even more stifling. The health department issued a warning to stay indoors. Local schools closed down for two days. And if you do go outside, you’ll see almost everyone wearing white masks over their nose and mouth, having the same muffled conversation: “Can you believe this smoke?”

But here’s the discussion I’m more interested in: “What are we really breathing in, and what can we do about it—if anything?”

“The main pollutant that comes from the fire is called particular matter, or PM. The most health-relevant particles are in sizes smaller than 2.5 microns—they’re pretty tiny particles,” says Yifang Zhu, Ph.D., professor of environmental health sciences and acting dean of UCLA’s Fielding School of Public Health. Zhu goes on to explain that the national standard for the presence of “PM 2.5” over a 24-hour period is 35 milligrams per cubic meter, which makes for an Air Quality Index of 99. Whenever the index measures 100 or over, she says, it becomes unhealthy. Today in San Francisco, the AQI is around 250.

“Airborne particulates are what we see, what we breathe, and what lodges into our breathing airways,” explains UC Berkeley professor Robert Rhew, Ph.D., who specializes in atmospheric pollution. “Not only are the particulates physically damaging to our lung tissue, they can also contain toxins like heavy metals. So the fact that [the fires] are burning a lot of infrastructure as well as vegetation can lead to very hazardous [health] conditions.”

Both experts contend that the main health concerns right now are short-term, and those with the highest risk of inflammation and disease have preexisting conditions. Children, along with individuals who suffer from asthma, other respiratory conditions, or cardiovascular issues, should stay indoors. If you need to go outside, visit the nearest hospital or hardware store and stockpile N95 masks, which the CDC suggests switching out every eight hours. And the time is probably right to invest in a HEPA air purifier, which can capture particles as small as 0.3 microns, ensuring that, no matter the state outside, your home is safe. As for the long-term effects caused by wildfires? That research is still new.

Beyond air quality, another primary concern to take into consideration during such strained times, and one worth addressing immediately, is the state of your emotional well-being. Research suggests that between 25 and 50 percent of all people exposed to a natural disaster may have some adverse mental health effects. Getting involved with local relief efforts in the community can provide a strong sense of solace and security. And for those who find stillness in meditation, making time to tune out the noise can be deeply grounding.

Yesterday evening, while driving home from San Francisco, the smog in the sky disappeared into the darkness as I approached the Golden Gate Bridge. I realized, for the first time since the fires began, what a relief the nighttime brings, mainly because I can no longer see the foreboding shift in atmosphere. All that’s visible is the moon, which hangs like an orange rind against a pitch black backdrop. It’s beautiful, but surreal, and I’m reminded how easy it is to take something as simple as a clear sky for granted.