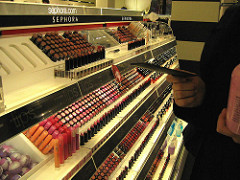 You’re standing in the checkout line at Forever 21, arms overflowing with crop tops and maxi dresses, taking full advantage of this weekend’s end-of-summer sale. You give yourself props: You cut yourself off after your third pair of high-waisted jeans—or so you thought. A highlighter palette tempts you from the rack near the register. What better way to complete your new look than with a pair of poppin’ cheekbones that will only set you back six bucks?

But a slew of questions stops your impulse purchase in its tracks. Why is that highlighter so cheap? Are the ingredients low-quality? Will they make you break out? A swarm of whiteheads starts to invade the sculpted, sun-kissed Chrissy Teigen-esque cheekbones of your daydreams.

Is cheap makeup any worse for your skin than expensive makeup?

The factors that go into making a product expensive often lie outside of its actual quality—think pretty packaging or a brand name affiliation. In fact, “many of the luxury brands are made at the exact same house as the over-the-counter brands to the point of having the exact formulation in a different package,” says Dendy Engelman, a dermatologist also based in New York City. Indeed, big companies often own a number of different brands, drugstore and luxury alike. For instance, L’Oréal owns not only Lancôme, Urban Decay, and Shu Uemura, but also the more affordable Maybelline New York and NYX.

Is there such a thing as too cheap, though? What about makeup from the dollar store?

There’s drugstore cheap, and then there’s dollar store cheap. While Dan Aires, director of dermatology at the University of Kansas Health System, warns against “blindly trusting brand name products,” which drugstores primarily carry, he’s wary of the no-name brands often found in dollar stores. With brand names, there’s at least a decent amount of accountability. “You’re a lot less likely to have problems. They really want to protect their reputation,” he says. “Dollar stores are a good place to stock up on party decorations…but for things that go directly [on and] into your body, it’s worth spending a little more.”

While the Food and Drug Administration doesn’t require that companies run any specific safety tests on their makeup ingredients, those that are reputable and have many physicians on their boards will test their ingredients, says Aisha Sethi, an associate professor of dermatology at the Yale School of Medicine, backing Aires. So while you might pat yourself on the back for scoring that lipstick you swear looks exactly like Fenty’s Mattemoiselle in Candy Venom for only a dollar, know that you also run a greater risk of a rash or other reaction.

What about the makeup at cheap clothing stores?

Aires has similar concerns as he does with dollar store makeup. But some of these retailers do sell the same trusted brands found in drugstores. Forever21, for instance, carries drugstore brands e.l.f. and NYX. Old Navy also sells e.l.f. makeup.

If the price tag isn’t great at predicting whether a product will mess up my skin, what should I look at instead?

“You should read the ingredients on the label,” Jaliman says. And if a product’s label doesn’t list any ingredients? Skip those products altogether, Sethi says. (If you have the time, she suggests searching the company’s website for an ingredient list. Still nothing? Pass.)

What ingredients should I avoid if I have sensitive skin?

If you have sensitive or eczema-prone skin, steer clear of fragrance, which Jaliman and the other dermatologists interviewed for this article all tell me is linked to contact dermatitis, or a red, flaky, itchy rash that emerges in response to direct contact with a substance. Most companies label the mixtures of scent ingredients in their products using umbrella terms like “fragrance,” “cologne,” “essential oil,” “masking fragrance” or “parfum.” Indeed, the FDA doesn’t require companies to list the specific ingredients in these mixtures—but some do, typically toward the end of the ingredients list. (Some examples include citral, geraniol, hydroxycitronellal and lyral.) Fragrances can be hard to avoid, though. Look for products labeled “fragrance-free”—not to be confused with “unscented,” which could actually indicate the addition of a fragrance to mask the product’s scent, Engelman says.

Some preservatives, meant to prevent bacteria, mold, and other microbes from growing on products, can also cause contact dermatitis. Formaldehyde and formaldehyde-releasing chemicals can have irritating effects too, says Shane Que Hee, professor of environmental health sciences at the University of California, Los Angeles. You can find quaternium-15, a formaldehyde-releasing chemical commonly added to makeup, in mascara, eyeliner, and powder. Que Hee adds that butylated hydroxyanisole (BHA) and butylated hydroxytoluene (BHT)—preservatives often found in eyeliner, eyeshadow, lip gloss, lipstick, foundation and blush—can cause skin allergies for some people.

While many of the dermatologists I interviewed for this article note that preservatives known as parabens, such as methylparaben and butylparaben, can irritate skin, the chemical exposure researchers I spoke to were more skeptical. Most studies on parabens have focused on their potential to disrupt hormone signaling “but not so much on the allergy-type effects,” says Dana Boyd Barr, a research professor of environmental health at Emory University. If you’re still concerned, though, look for products labeled “paraben-free.”

Barr does caution against phthalates, such as diethyl phthalate (DEP), used to hold color, fragrance, or shine, or to impart flexibility. Moderately-sized human studies have associated them with allergic effects, like wheezing, coughing, and asthma, “so they may be able to exert skin effects, as well.” But she notes that few studies on phthalates have looked specifically at skin irritation. The problem is, “phthalates are rarely listed” on cosmetic products—and the FDA doesn’t require them to be, since they’re not active ingredients, she says. If you’re worried, choose products labeled “phthalate-free.”

What ingredients should I avoid if I have acne-prone skin?

There are a few scenarios in which makeup can trigger an acne breakout, says Susan Taylor, an associate professor of dermatology at the University of Pennsylvania’s Perelman School of Medicine, but the most common scenario results from comedogenic ingredients. “That means they’re oil-based and they’re going to plug the hair follicles”—a.k.a. pores—“and that’s going to generate acne.”

Some of the most common comedogenic ingredients include oils—like almond oil, wheat germ oil, and cocoa butter—as well as waxes and petrolatum, Taylor says. She notes that coal tar, a black pigment used in mascara and eyeliner, can also cause breakouts. The same goes for coal tar-derived pigments , whose names start with FD&C or D&C (D&C Red 21, for example), especially red ones. Avoid silicones, too, which often have“–oxane” or “–methicone” tacked onto the ends of their name, Jaliman says. They allow products to glide on easily but can also clog pores. For extra reassurance, shop for products labeled “non-comedogenic.”

What makes a product bad for my lips? Whenever I wear a heavy lipstick or lip gloss, my lips get flaky and irritated.

Lip stains and other long-wear lip products, which tend to have a thicker, denser consistency, can be “really irritating,” says Lisa Airan, a dermatologist in New York City. “Some people can’t tolerate the long duration.” Engelman adds that these products “are not very hydrating” and made with lots of pigment, giving them potential for more of an allergy response.

Okay, and what about that whole endocrine disruption thing? Can I get cancer from using cheap makeup?

Endocrine disruptors are chemicals that interfere with hormone function—and parabens, arguably the most notorious, have been detected in female breast cancer tissue, Que Hee says. But while there seems to be a correlation between endocrine disruptors in hair products and breast cancer risk in African American women, epidemiological studies on endocrine disruptors in makeup alone are still ongoing. That said, the concentrations of parabens in makeup are probably not all that different from what you might find in hair products, he says. Other ingredients, like octinoxate and a group of chemicals known as siloxanes, can also interfere with hormone function, although their correlations with breast cancer are less clear. Keep in mind that using a lot of products that contain potential endocrine disruptors (and using them often) ups your risk. Using these products once in a while is not likely to cause any issues.

If it worries you though, avoid products whose labels or safety data sheets list these ingredients, Que Hee says. Again, if you’re worried about parabens, many companies explicitly label their products “paraben-free”—although Barr would rather use products that contain known ingredients than their less-studied alternatives. But she realizes “a lot of people feel differently about that.” She suggests asking companies about the ingredients in their products and deciding for yourself whether you’re willing to accept the possible risks associated with them.

So what you’re saying is that $6 highlighter won’t necessarily make my face explode into a hot, itchy, or pimply mess?

In the end, “it’s all about the ingredients,” Jaliman says. As long as the product lists the ingredients on the label—and you don’t recognize any that could cause your skin problems—then go ahead and glow up. But if you want to be extra cautious, heed Aires’ advice, and make sure it also comes from a well-known brand you’d find at a drugstore.